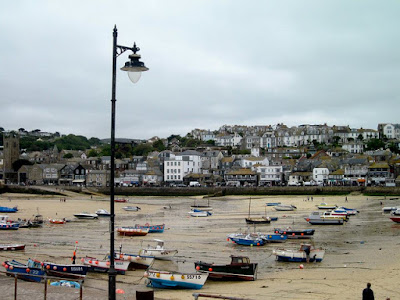 Every year, about the first week in September, we would cry "The pilchard boats are out!" There they were being hauled down the beach, where they lay one behind another all the rest of the year. Horses were struggling to draw them over the beach. They were anchored near the shore, and looked like long black shoes, for each had a hood for the watchman at one end, and a great coil of net -- seines they were called -- at the other. The tarring of the pilchard boats was a regular occupation; and made the beach always smell slightly of tar. There they lay week after week, and were still lying when we left in October, waiting for the Huer who sat at his telescope up in the white shelter on Carbis Bay point to sight a shoal. He sat there looking for a purple stain of pilchards to come into the bay and beside him was a great horn of some kind.
“A Sketch of the Past”  (MOB 130)
Posted by Elisa Kay Sparks at 6:44 AM