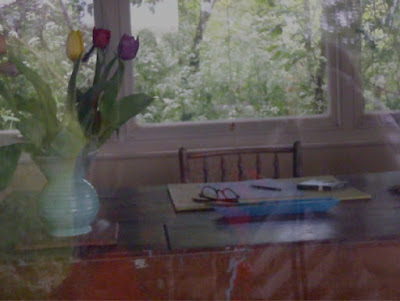 A moment later the light had faded. Out in the garden then? But the trees spun darkness for a wandering beam of sun. So fine, so rare, coolly sunk beneath the surface the beam I sought always burnt behind the glass. Death was the glass; death was between us; coming to the woman first, hundreds of years ago, leaving the house, sealing all the windows; the rooms were darkened. He left it, left her, went North, went East, saw the stars turned in the Southern sky; sought the house, found it dropped beneath the Downs. "Safe, safe, safe," the pulse of the house beat gladly."The Treasure yours."

On September 1, 1919, the Woolves made the move from Asham to Monk's House.

Posted by Elisa Kay Sparks at 9:51 AM