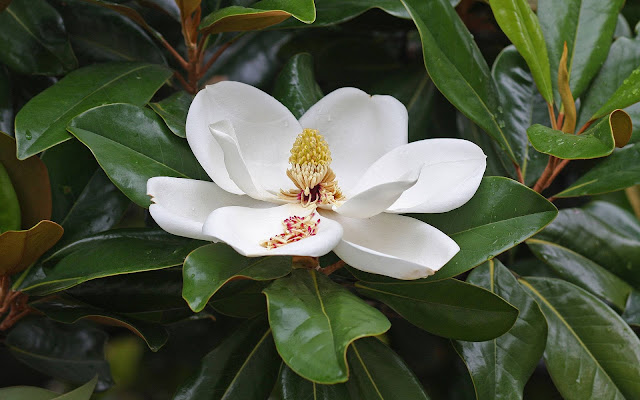 She looked at him against the background of flowering magnolia. There was something curious in the sight.  Perhaps it was that the heavy wax-like flowers were so smooth and inarticulate, and his face-- he had thrown his hat away, his hair was rumpled, he held his eye-glasses in his hand, so that a red mark appeared on either side of his nose--was so worried and garrulous.  It was a beautiful bush, spreading very widely, and all the time she had sat there talking she had been noticing the patches of shade and the shape of the leaves, and the way the great white flowers sat in the midst of the green. She had noticed it half-consciously, nevertheless the pattern had become part of their talk.
The Voyage Out (208-9)

March 9,1913: Voyage Out delivered to Gerald Duckworth
Posted by Elisa Kay Sparks at 10:03 AM